Below is the wonderful story of how Barbara De Abreu trained and took part in two runs this summer and raised 630 Euros for Ovacome as part of her T.W.O. 2015 Pledge. Well done Barbara and her team Run for Tea. Here is Barbara’s story:

It started with Tea and a pledge to raise £100 for Ovacome at the 2015 Tea with Ovacome event. A few ideas came to mind….. a bake sale, a sponsored walk/run or the selling of some Haute Couture (not really, but close). The fund raising campaign for Ovacome included a recruitment drive to get some friends to run with me on the 5km course of the Belfius Marathon and Half Marathon.  A minor hiccup, I could not find Ovacome on the Belfius charity list but managed to get the go ahead from the organisers.   As the Belgians have been the generous host for the past 26 years, I decided to share the fund raising campaign with Think Pink Belgium.Training started during summer with lots of welcomed interruptions. I participated in the 2015 Brussels edition of Race for the Cure for breast cancer as a warm up for the Belfius event in October.  I went out to support Think Pink Belgium by walking the 3km course.   A challenge from a friend, I was encouraged to run the 6km course instead.  Well, if I could not finish it running, I would walk or crawl to the finish line. The 6km course completed and dedicated to the family and friends who were fighting breast cancer and to survivors of breast cancer. 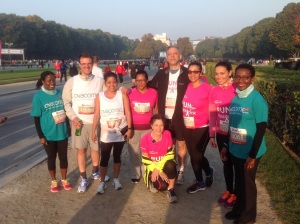 I had great support from a fantastic group of people.   Cherryl Cooper has aptly named the group Run for Tea. So what started with Tea with Ovacome will continue as Run for Tea.

Cheers to Ovacome, Tea with Ovacome and Run for Tea!